In the past three weeks since Easter I’ve been feeling the energy of Mary Magdalen come through incredibly strongly for me. (See my initial inquiry here: https://www.facebook.com/arden.leigh/posts/1643191379028923:0) On Friday I went into ceremony and set the intention to discover what this was all about, and I’d like to share with you the message I received.

(**Requisite spirituality disclaimer: I cannot, nor can you, prove anything about our spiritual beliefs beyond what we know in our hearts to be true. If you believe something different I welcome your sharing your perspective from a place of kindness, but please refrain from debates.**)

It started with this post that I made on Easter Sunday in appreciation of Jesus I couldn’t tell where it was coming from, but in the coming days as I started to see more and more Magdalen references and synchronicities appearing, I realized that in writing it I was embodying her energy, which, as she was Jesus’s intimate partner, was the inexplicable feeling that I understood Jesus better than anyone else.

Anyone who has read or watched The Da Vinci Code knows that there is compelling evidence to the theory that Mary Magdalen was Jesus’s wife, and that she was not the “prostitute” in the story of casting stones until the church conflated her with that woman several centuries after the incident (see video in comments). At the very least, there is distinct evidence in the art and literature of the Dark Ages that Magdalen as bride was a deeply-held heresy at the time, and some believe that there is archaeological evidence that still exists today but has been suppressed. Because support for this theory exists already and you can research it if you wish, I’m not going to get into it too deeply here, because what I want to get into is what was shown to me gnostically.

What has been presented to me in recent weeks was that Magdalen was not only Jesus’s bride but also his twin flame – a specific relationship phenomenon in the spiritual community whereby two partners share the same soul, and therefore the same core values and core wounds, but express them in oppositional manners – masculine/feminine, feeling/reason, dominance/submission, hyperarousal/dissociation, etc, because they are mirror images of each other. This is clearly seen in the Da Vinci painting of The Last Supper where Mary and Jesus are painted as mirror images of each other, down to the split flame imagery in their red garments. 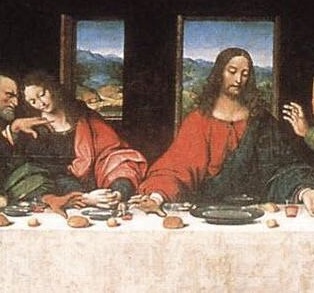 Because twin flames are spiritually yoked, they are always at the same point in their spiritual development. It is impossible for one twin to advance in his/her angelic awakening without the other twin doing so as well. Which means it would be impossible for Mary to be any less divine than Jesus himself. 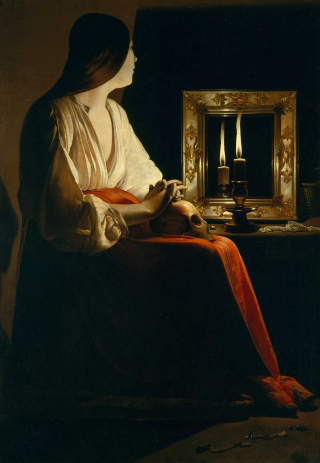 What has been presented to me through gnostic work in meditation and ceremony is that the nature of divinity is cumulative soul experience – everyone has within them the potential to grow into the divine, everyone is capable of doing the work to reach enlightenment and perform magick (as Jesus did), angels are merely disembodied souls who are in self-awareness of their divine nature and at peace with the collective Oneness that is “God”/Source, and Archangels are only different from us in that they have seniority, they’re old souls who have been around a long time and no longer have to do the human thing. This also meshes with the eastern ideas of reincarnation and nirvana.

This means that Jesus was both human and divine, but it also means that to an extent, we all are – Jesus was just further along in his spiritual development. But that then means that Mary Magdalen, as his twin flame, was just as far along – she was equally as divine as Jesus. It just happened that she was born into a society that didn’t allow her nearly as much of a platform. And ultimately the church smeared her entirely not just as a means of policing sexualities (and let’s face it, they are policing men’s sexualities as much as they are policing women’s, they just make women a more obvious scapegoat), but as a means of denying women their divinity.

In ceremony Friday night I finally started to understand why she has been coming through so strongly for me at this point in my journey, because for the past year I have been examining a deep-seated unconscious story of unworthiness that both kept me out of balanced mutual relationships and also propped up my submission. In the submissiveness of BDSM I found a safety in editing myself down to be convenient to my lovers; being pleasing was a turn-on because it was a (mostly false) assurance that I would not be abandoned. I not only did this in relationships with specific people but also in relationship to the whims of the patriarchal matrix – the infrastructure that tells women exactly the impossible balance of attractiveness, sexuality, submission, exclusivity, caretaking, and intelligence she must have in order to be desirable and therefore protected by society. I became a bisexual published author lingerie model who deeply understood and catered to the needs of men and promoted ideals of sexual freedom while still retaining exclusivity around who I chose as lovers. And while it was remarkable the extent to which I succeeded in that, I eventually discovered that patriarchal bargaining was mostly a scam, useful only in bargaining for the rewards of the patriarchy (such as free vodka, shoes, and relationships with narcissists), and that the men who loved me because I pleased them didn’t actually love me at all, even when my pleasing them was a genuine expression of my love. I saw how many blind spots I had in regard to how much of myself I was leaving out of my relationships by only bringing forward the parts of me I could be assured were pleasing and editing out the bits of self I was able to be around my close friends.

Last year when I began to see the discrepancy between my own cognitive opinion of my worth (based in my achievements in conforming to the standards of the patriarchy) and my actions in plea-bargaining or negotiating in angling to be chosen, I realized that my actions were betraying an unconscious core feeling of unworthiness, and that I was clinging to it because it was the pedestal upon which my submission rested – as in, if I were to truly feel worthy of a partner, would I still want to be submissive, and if I no longer want to be submissive, will I lose not only my greatest source of pleasure but also the assurance of my safety within the patriarchy. However, I understood based on the laws of the universe that I was manifesting my own unworthiness and that if I really wanted a successful partnership eventually, that would have to change. So I launched a sigil to release my core narrative of unworthiness, and that’s how all this stuff started happening.

So in going on this journey to claim my worthiness, what I’m doing is casting off the demands of the patriarchy in order to claim my worthiness of equal partnership – which is exactly the narrative of Mary Magdalene being reinstated as not only Jesus’s bride but as his equal partner, his twin flame, his mirror image as depicted by Da Vinci. And in healing this wound to the feminine in myself, I am also healing it within the collective, because to heal the self is to offer healing to all. And I’m amplifying it by writing about it so that others can follow the same steps I’m taking if they so choose.

So that’s what’s showing up for me right now. (Also no coincidence that I too was smeared as a sex worker by the NY Post when they outed me as a domme!)