Another adventure in synchronicity, anecdoted here as an example for those who wish to learn more about hearing messages from the universe in their own lives:

Last week in San Diego my friend Elie Prana led our private women’s group in a vision boarding exercise where we were to look through magazines to find a couple images to represent a desire we want to manifest in the next 2-3 months and then put them together with a headline as though it’s our own personal magazine cover. I decided to set the goal of manifesting self-love.

The first image that struck me was on the cover of one of the magazines – a blonde girl in a simple white dress reaching out to touch two giant purple crystals in a field of green earth. The way she was standing in a field uniting two halves of the geode felt like my mission of creating union between polarities. It hit me so immediately it almost felt too obvious, or like I didn’t want to steal the best image from the rest of the group right away, but ultimately I reached for it and set it next to me. 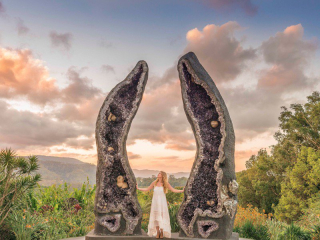 Then I grabbed the next magazine I saw and flipped it open to a random page in the middle, and when I looked at it, it freaked me out so hard that I actually yelped and tossed the magazine away from me. It was the exact same image, only instead of being earthbound, it was on the astral – a blonde girl in a white dress with her arms out in the same pose, only dressed in a glamorous and otherworldly manner, posing in a geometric domed space, in an ad for Thierry Mugler’s fragrance Alien… which was shown in a bottle that was a purple crystal. 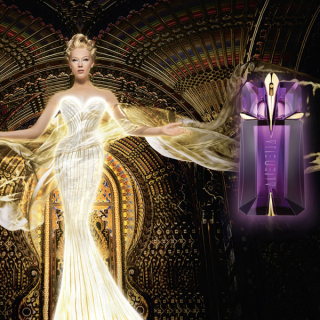 Blonde girl, white dress, purple crystal. One on the earth plane (3D) and one on the astral (5D).

The message was clear: to achieve self-love, you must unite your astral starseed self with your human earthbound self. The phrase “We are not human beings having a spiritual experience; we are spiritual beings having a human experience” came to mind.

It’s probably also no coincidence that on the drive down just hours earlier I had been listening to this Laura Eisenhower talk from the 2016 Free Your Mind conference about alien life, stargates, invasions, and shifting resonances within ourselves in order to aid the shift of energies in the collective on the planet (caveat, this talk is super weird): https://youtu.be/FA2LUIDNR0k When I saw the word Alien on the page it immediately jumped out as relevant.

I cut out the earth image and gluesticked it over the alien image (the purple geode on the right mostly obscures the purple crystal bottle behind it), and then quickly wrote up a headline. Elie said, “Arden, I’ve never seen anyone do that so fast. You were done in under 5 minutes. That means this is coming to you very quickly and easily.” 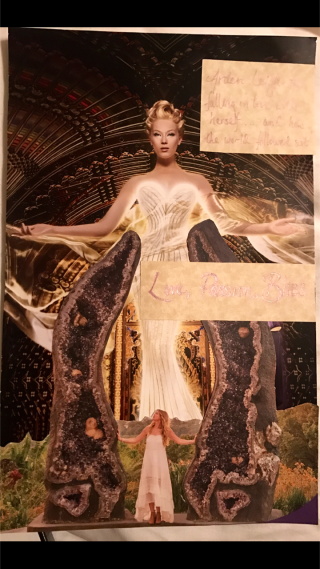 So, that was my message. Unite your star self with your earth self and you’ll be fine. Understand that this incarnation is but a blip on the radar and that we all return to Source where we are united in perfect love, and falling in love with yourself will be inevitable.

Hope this helps anyone seeking their own messages. Highly recommend trying this vision boarding exercise for yourself!