This is super weird.

Today on the Scorpio new moon I decided to rewatch a lecture by one of my alchemist heroes Laura Eisenhower (clip here: https://youtu.be/FA2LUIDNR0k) for the first time in about eight months. When I had watched it this past spring, I still understood only about 20% of what she was saying, but I found myself compelled, wanting to know more, and feeling a vague resonance with the ideas I couldn’t explain. I was like “I don’t know what this is, most of it sounds really crazy, I have no idea what she’s talking about, but I know I felt guided to it and I think there’s something here I’m supposed to understand.”

When I watched it again today, I understood about 90% of it. I found myself going “Yes! That exactly explains what’s going on! Yaaassss bitch, preach!!” I understand the material realities happening that correspond to the larger, zoomed-out mythologies she’s unpacking. I know what she means, and I see it happening in the world around me.

I’m like… what the hell spell did I cast that did this? How did I take in this much expansion?

Laura did a natal chart reading for me several months ago, and I posted about it at the time, because she had given me some insights about my mission on the planet that had been incredibly affirming for me.

She said to me, “[Your healing work] has kept opening doors for greater work and greater service so it’s manifesting in your career path as something really huge, as a gift to humanity. All these different trials and tribulations or processes that you’ve gone through, your chart shows that the end result of where it all goes is to humanity as a gift, as a teaching, as something that is beyond just ‘oh ok, I got over it’ – it’s like no, you’re actually bringing in major downloads and ancient wisdom and your unique authenticity. You activate and upgrade – there’s just no end to what this level of embodiment can do for anybody who is in front of you – we’re talking like one-on-one individuals and large large groups, and it becomes global. I mean your emotional psychic energy encompasses the whole of Gaia.

“When Pluto is next to Saturn it’s usually related to someone who is a teacher of sexual healing and alchemy and things that relate to what Pluto represents, which is the regenerative power of nature. Saturn has to do with the path of mastery and being a teacher, and you have this in the fifth house of creativity, and it’s also next to the asteroid Pallas Athene which is wisdom, and then also Mars which is in your chart in Libra, which is partnership. So your Mars expression vibrates at the Libra energy which is all about finding that sacred union.

“And what an amazing leadership role to have. Because you’re on this path, and you have the ability to reach such a huge global population, you help bring people into that. They don’t have to understand it – you invite them into that frequency. And so you play such a major role in this Ascension.”

Today I realized that in intertwining my trauma healing process with both the writing of my EP and the blog entries I’ve kept that are starting to form the trauma healing companion book I’m authoring (whether you want to argue that the writing of the EP/book was the magickal working that catalyzed the healing process, or whether you want to say that I simply wrote an EP and book about my personal journey through that process whether consciously or not – chicken or the egg, really), and in somehow timing my own personal trauma healing on the micro just on the crest of that same wave in society on the macro, I had inadvertently created #MeToo the album and crafted the skeleton start of a guidebook for navigating the wave. 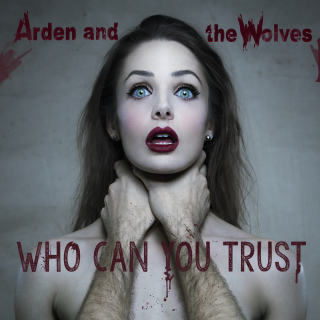 The EP, titled Who Can You Trust, is about the feminine polarity cultivating discernment, learning to honor her feelings and needs, and waking up from the fetishization of her submissive role in the patriarchy – understanding that the power she was conditioned into giving others over her was not always used with her best interests in mind. Its token cover song, Poison Heart, a Ramones song whose chorus laments “Well I just wanna walk right out of this world, cuz everybody has a poison heart,” perfectly encapsulates the jadedness, shock, and fatigue in the wake of the Weinstein fallout and its revelation of everyone’s complicity in a broken system, even that of our heroes and loved ones. The cover photo, shot by Allan Amato, features my face looking particularly sex-doll-esque with a man’s hands around my throat, my expression frozen in a gasp of uncertainty at whether to feel turned on or genuinely afraid – is he choking me because it gets us off, or is he actually going to kill me?

Even more remarkably, the photo was shot BEFORE I had even begun the concept of the EP’s final song, The Death of Me, whose refrain asks, “Are you everything you seem to be, or are you gonna be the death of me?” – a line I wrote at the time not as a critique of a society where too many men hurt/kill/assault women but rather because I was genuinely uncertain whether I was going to get hurt in my love life given my empirical history of cruel partners and the normalization of brutality in my experience. I was writing about the trees even while not seeing the forest.

And even weirder, I began writing that song BEFORE I realized its point was to alchemize that toxic codependent narcissist/empath dynamic by writing the soul mirror encounter into the bridge and changing the lyrics of the final chorus (“Yeah you’re everything you seem to be, and so you’re gonna be the death of me”) so that “death” is no longer a physical threat of violence nor an emotional threat of abandonment but rather the necessary death of the ego on the path to sacred union. The song begins in toxic codependence, attempts to plea-bargain its way to safety, and then finally breaks through the oppressive programming of the matrix to the healing of the masculine/feminine by realizing that both are suffering from the oppositional polarities of the same core wound, and that it is through healing that wound in each that they are both made whole, which allows them to come together in true union, the 11, the twin flame path, the two wholes as one.

So when Laura talks about earth being an ascension planet, and that there are those of us here during this critical period when the timelines are shifting so quickly and easily whose mission it is to help ease society into a higher state of being by unifying the divide between the masculine and feminine energies that happened with the collapse of the hieros gamos, the sacred union (the collapse of Tara dimensions 4-5-6 into Eartha dimensions 1-2-3), and by rectifying the Luciferian rebellion (free will) with the Christ consciousness (unity), and ridding the planet of the galactic influence that is the negative ego, or the destructive force of power, or the separation illusion, aka the patriarchy and all its comorbid systemic injustices that came about in the abuse of power that came with living in a free will universe, and then identifies me as someone on that mission for the collective by healing it in myself and sharing the blueprint, and in doing it through the path of mastery (Saturn) in my fifth house of creativity… she’s basically saying I was going to unconsciously record an album about the #MeToo movement.

Which is why the Magdalene energy started showing up so strongly for me this past April and why I saw my role in healing my self-worth around my relationships as part of the larger restoration of the feminine (The Magdalen, Jesus’s bride and twin flame, the missing part of the Trinity aka holy desire or the feminine smeared by the Church with the fearful agenda of suppressing women’s power by shaming their sexuality and removing their rights) to her rightful place alongside the masculine – the hidden message in nearly every medieval fairytale like Cinderella or Sleeping Beauty where the Prince (divine masculine) must put everything in the kingdom on hold while he searches for his lost princess (the divine feminine) to restore her to her rightful place beside him as Queen, as equal, in true love. (Please don’t call Cinderella unfeminist btw, Cinderella’s survival and self-care and use of magick and spirit guides/fairy godmothers through her childhood abuse was an act of fucking resistance.) Which is why I was like “I don’t know why but I need to rewatch The DaVinci Code” and also why my band Arden and the Wolves draws so heavily on the imagery of fairytales. Which is why all this twin flame stuff started popping up because that’s really all this is – the restoration of true equality… only on the micro (healing the divine union within ourselves, finding wholeness), so that it can also occur in the dual (human relationship), and then on the macro (society) and the MACRO-macro (energetic/galactic).

I mean I kept joking that I wanted to hone my shamanic skills enough to channel an EP straight from Mary Magdalen but it turns out I was kind of doing that already.

Which means this year of my life is basically the reason I incarnated on this planet.

Somebody call Vigilant Citizen on my ass please.

I don’t know how I feel about being this weird.